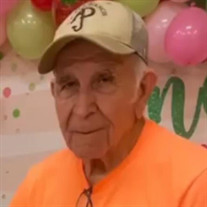 Pablo Cerda Sr., born in Mission Texas on March 22, 1938, entered eternal rest on November 4, 2021. He is preceded in death by his parents Antonia and Martin Cerda, his siblings; Martin, Rumaldo, Raul, Manuela Longoria, Maria Del Jesus Gonzalez and grandchildren Jessica Ann, Johnny and Celeste Adele. In 1959, he married the love of his life Maria Calixtra Cavasos, they had six children together. He honorably served in the United States Army Reserve and worked for the Texas Department of Motor Vehicles from 1957 to 1963. Other employers included Parker Seals and Coca-Cola in McAllen. Pablo was a devoted volunteer for many years, his passion was helping children and the needy, never expecting anything in return. As a universal blood type donor, he was contacted multiple times to donate blood for children in need. He volunteered at the First United Methodist Church since 2000, serving and helping feed the community. In the 80’s, he was Mission Volunteer Fireman and for over 43 years, he volunteered at the Texas International Fishing Tournament (TIFT) which brought him great joy. He would collect the donated fish from the tournament, fry it up and give it back in the form of free fish tacos to anyone and everyone hungry for fish. He was TIFT’s greatest marketer, he advertised for TIFT every single day of his life. Not a day went by that he wouldn’t walk up to someone and ask, “Have you heard of TIFT?” He would then unbutton his shirt and show them his TIFT t-shirt underneath, like superman and the conversation began. Most recently, he served as a director for the Mission Sunset Lions Club for the 2021-2022 year. Pablo is survived by his wife, Maria and children; Pablo Jr (Elva), Maria “Cali” De Los Santos (Leonard), Julio (Emmy), Edna Rodriguez (Rey) of San Antonio, Melissa, and Jesse (Melissa) of Lampasas Tx and by his sisters Maria Evangelina Canales and Maria Antonia Garcia and step-brothers Abraham and Juan Padron. Grandchildren. Leonard (Victoria) De Los Santos III, Erica (Brad) Shaeffer of Marion Tx., Christina Cerda, Chelsea (Isaac) Rodriguez of San Antonio, Andrew De Los Santos, Bethany Thompson of Dallas, Victoria (Saul) Garza of San Antonio, Carissa Cerda who is currently moving to Maryland, Julio (Jay) Cerda Jr., Isabella Cerda, Zachariah (Zach) Rodriguez, Nicolas Cerda of Philadelphia, Adrian Cerda, Diamond Marie Lopez, Anthony Reyes of San Antonio, Yessenia Rodriguez of Corpus Christi and Yuliana (Patrick) Kivel of Mechanicsburg PA. Great-Grandchildren, Cameron, Daniel, Ellianna, Warren, Christopher, Astrid, Gabriel, Allison, Caleb and Leonidas. His wife Maria and his entire family grieve the loss of their cherished father, grandfather and great grandfather. His love of cooking and sharing his food with others along with his love of the outdoors, service to his community and storytelling will remain in our memories always. Viewing and Services: Monday, November 8, 2021, viewing 5:00 pm-9:00 pm at Virgil Wilson Mortuary, 2200 N. Conway, Mission, TX 78572. Wednesday, November 10, 2021, Memorial Service 11:00 am followed by Luncheon in the Dinner Hall at First United Methodist Church, 1101 Doherty, Mission, TX 78572. In lieu of flowers, the family humbly suggest gifts to the Food Pantry of the First United Methodist Church of Mission, 1101 Doherty Ave. Mission Tx 78572.

The family of Pablo Cerda Sr. created this Life Tributes page to make it easy to share your memories.