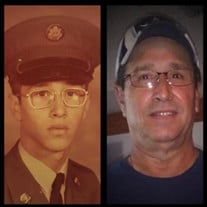 Palmview - Noe Humberto Flores Jr was taken to his heavenly home on Thursday, January 28, 2021 while surrounded by loved ones. Noe is survived by his mother, Mina Flores; his wife of 14 years, Patricia Cerda-Flores; his children, Noe Humberto Flores III, Sarah Flores-Silva (husband Jeremy), Suzie Flores, Raul Salinas Jr, Randy Salinas, Thalia Flores, along with 10 grandchildren; siblings, Javier (wife Cindy), Jaime, Sandra, and Joel Flores. Noe is proceeded in death by his father, Noe Humberto Flores Sr and father in law, Raul Cerda. Noe grew up in Sullivan City, TX. He graduated from La Joya High School in 1972, joined the US Army later that year serving during the Vietnam War. He completed his tour in 1975 having served in Germany receiving the National Defense Service Medal. His reason for living changed in 1985 when he became a proud father. He lived a very colorful life and found his true love in 1996 when he met his loving wife, Patricia, who he went onto marry in 2007. Together, they formed a beautiful blended family full of love. Noe was a family man who was known for his cooking. He loved with his whole heart, as seen by the outpouring of love, prayer, and continued support throughout this difficult time. The Flores Family would like to thank family and friends who have prayed diligently throughout the past few weeks. “I have fought the good fight, I have finished the race. I have kept the faith. Now there is in store for me the crown of righteousness, which the Lord, the righteous judge will award me on that day.” 2 Timothy 4:7-8 Visitation was scheduled for Tuesday, February 2, 2021 from 3:00 pm to 8:00 pm with a 6:00 pm rosary recited at the Lord and I Funeral Home in Peñitas, Texas. Funeral Service was officiated at 10:00 am on Wednesday, February 3, 2021 at the Lord and I Memorial Chapel in Peñitas, Texas. Interment followed at Rio Grande Valley State Veterans Cemetery in Mission, Texas. Due to the current climate surrounding COVID-19, we are limiting the amount of visitors to our facility and requiring all guests to please wear a mask and observe social distancing. You are invited to sign the online guest book at www.lordandifuneralhomes.com Funeral services are under the direction of the Lord and I Funeral Home of Peñitas, Texas.

Palmview - Noe Humberto Flores Jr was taken to his heavenly home on Thursday, January 28, 2021 while surrounded by loved ones. Noe is survived by his mother, Mina Flores; his wife of 14 years, Patricia Cerda-Flores; his children, Noe Humberto... View Obituary & Service Information

The family of Noe Humberto Flores Jr. created this Life Tributes page to make it easy to share your memories.