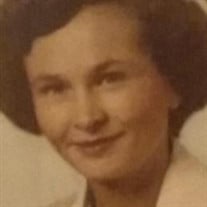 Joan Rose Schneider (Francart) formally of Shawano, Wi. passed away at home peacefully on February 5th, 2021 surrounded by loved ones from near and far. Born on February 19th, 1932 in Neenah, Wi. the daughter of the late George Sr and Ella Minnie Emilie (Zastrow) Francart. Joans daddy died when she was three. Her mother married Harold Dahl who was Joans stepfather and she and her brothers Louis and George Jr were raised on Harold's family farm in Bowler, Wi. Joan married Verner J Schneider on September 20th, 1952 in Bowler. They raised 10 children in Neenah until 1969 when they moved to Bowler to help on the family farm. In 1972 they moved to Shawano. Joan worked at Schultz's family store and also sold Amway. In 1986 they retired to McAllen, Texas. They were winter Texans traveling back to Wisconsin to stay with their children in the summer months, visiting family and friends. 1999 was the last summer back to Wisconsin. They were now official Texans. Mama enjoyed knitting, crocheting, tatting and word search games. She loved playing her keyboard, playing many old hymns and songs. Mama was a fun-loving, gentle lady, and all who knew her will miss her smiles, humor, and good nature. She asked for little but gave of herself daily. Joan is survived by her loving husband Vern, her children Michael (Maya) McAllen ,TX, Teresa (Rod Clauss) Birnamwood, WI., Terry, Bowler, WI., Steve, Cameron, WI. Jerry ( Loretta) New Boston, TX., Suzanne (Donaya Ashoka) San Antonio, TX., Paula (Steve Landau) Birnamwood, WI., Angie Bistoff, Shawano, WI., Tony (Lori) Albany, VT., Elise, Houston, TX. 25 grandchildren, 29 great-grandchildren. Joan is further survived by 6 sisters-in-law, 2 brothers-in law, and numerous nieces and nephews. Joan was preceded in death by her parents, 2 brothers, and 3 grandchildren. We will always remember Mama's beautiful smile, strength, faith, love, and all the beautiful prayers she gave us throughout the years. Forever in our hearts ❤️ His Lord said to him, "Well done, good and faithful servant. Enter into the joy of your Lord." Matthew 25:21 A private celebration of Mama's life was held on February 9th at their home, in McAllen, TX. A celebration will be held in Phlox, WI. at a later date to be determined.

Joan Rose Schneider (Francart) formally of Shawano, Wi. passed away at home peacefully on February 5th, 2021 surrounded by loved ones from near and far. Born on February 19th, 1932 in Neenah, Wi. the daughter of the late George Sr and Ella Minnie... View Obituary & Service Information

The family of Joan Rose Schneider created this Life Tributes page to make it easy to share your memories.