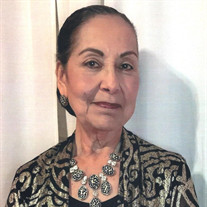 Dianira Salazar, aka “the Loteria Queen,” from Edinburg, Texas (born in Sullivan City, Texas), has decided it was time to join her parents, Lupita and Enrique Flores, and two brothers, David and Noel, in heaven. She is survived by a brother, Roy (Becky), and sister, Nidia (Roberto). Dianira was an amazing hustler. She always found a way to make an honest buck with diligent hard work. Her baked goods, which she sold all over the Valley area, were guilty pleasures everyone was familiar with and enjoyed. Her delicious pastries were especially known all over La Joya, where she worked for the school district for over 35 years and proudly served food to thousands of children. If you never got the opportunity to taste her baked goods, I am so sorry for your loss. In addition to baking and selling baked goods, Dianira also rented out recorded movies on VHS tapes, sold breakfast tacos, made decorative sweatsuits, sold chai seed drinks, and made masks. There was never an opportunity that she came across where she did not think, “I think I can make that and sell it?” Dianira also had a wicked sense of humor which sometimes (okay, maybe often) got her into trouble. However, her smile, laughter, and wide-eyed innocent doe eyes were her free passes from any serious repercussions. She LOVED thrift store shopping because great deals were part of her DNA, enjoyed chismes, if she was not involved (don’t we all), and utterly enjoyed watching The Price is Right, Wheel of Fortune, and Family Feud. She also was a huge Dallas Cowboys fan. She never yelled as loud as when the Cowboys were doing poorly, which happened a lot this past season. However, the most important people to this amazing woman were her grandchildren. She adored all 15 of them. She also loved her sons-in-law, Edward and David. But, her children, Norma Salazar Cortez, Dianira Aluko, Nidia Rippistine, and Antonio Salazar, Jr. were the lucky ones, as they got to call her Mom. The world is now less glorious because Dianira is not gracing us with her kind and generous heart. Even though this world continues, those who knew her well, know it will never be the same without her physical presence. So, despite their heavy sadness at such a great loss, Dianira’s family will continue forward by honoring her with being the best versions of themselves, which was her primary wish. Due to the current climate surrounding COVID, visitors are asked to wear a facemask/covering. Arrangements are under the direction of Lord and I Funeral Home in Peñitas, TX.

Dianira Salazar, aka &#8220;the Loteria Queen,&#8221; from Edinburg, Texas (born in Sullivan City, Texas), has decided it was time to join her parents, Lupita and Enrique Flores, and two brothers, David and Noel, in heaven. She is survived... View Obituary & Service Information

The family of Dianira F. Salazar created this Life Tributes page to make it easy to share your memories.

Dianira Salazar, aka “the Loteria Queen,” from Edinburg, Texas...